- March 07, 2020
Say hello to the updated powder room. It's a challenging space and my goal was to brighten it up on a budget. The room is approximately 5' x 7'(and I'm rounding up), has no windows, and contains the washer and dryer. 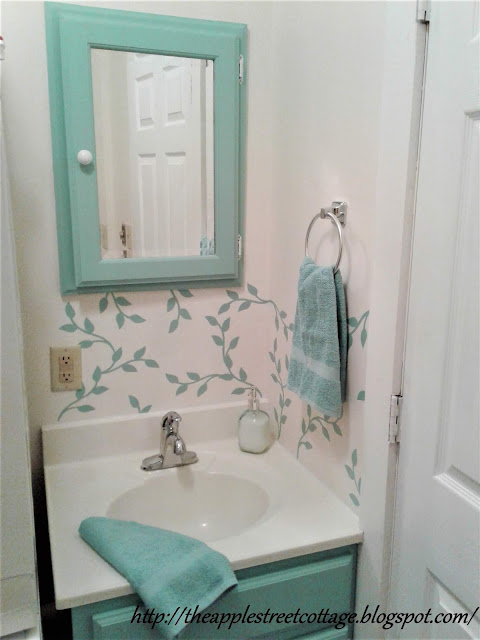 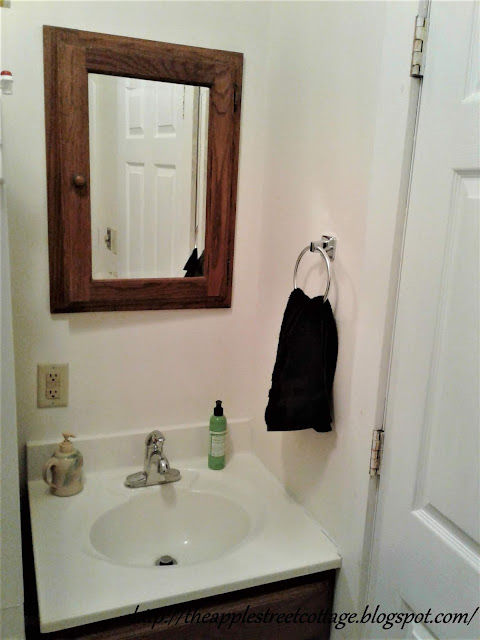 Here's a separate shot of the vanity.  It was tough to get the whole area in one photo since the room is so small. 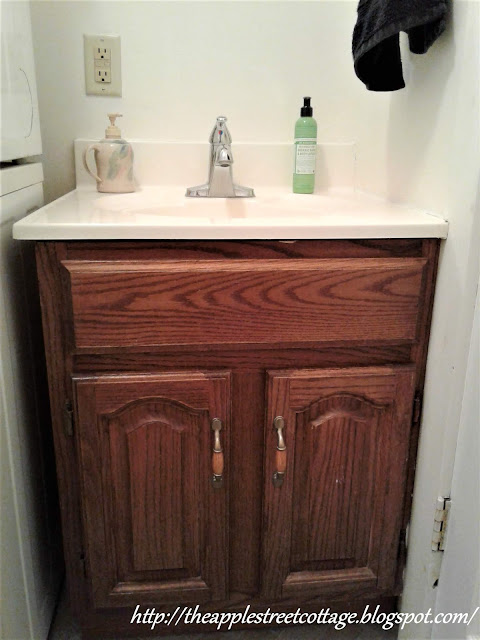 I decided not to paint the walls since the dryer is stacked on top of the washer.  See them right next to the vanity? In order to get them out for painting, I'd have to take the door to the room off it's hinges and move it.  I wanted this to be an easy makeover, so I opted to paint the medicine cabinet and the vanity.
Off came the hinges, knobs, shelf pegs, and pulls.  The pulls were being replaced, but everything else was spray painted. 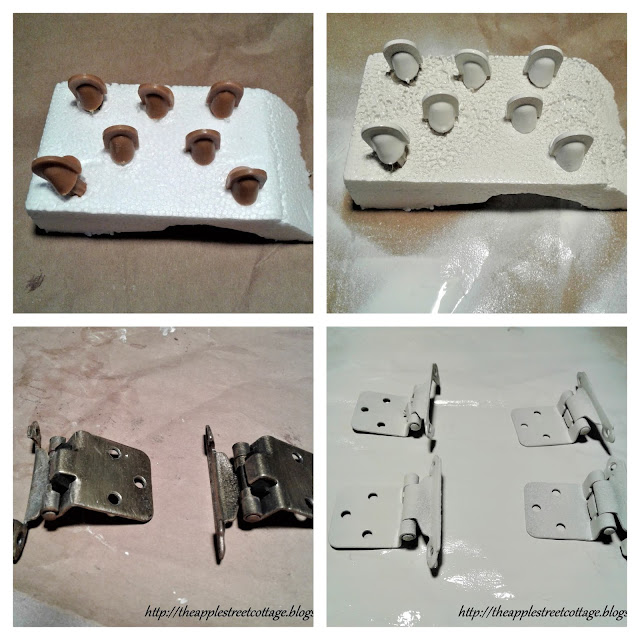 Did you notice there are only seven shelf pegs?  Someone decided it was a good idea to glue one of the pegs in the hole and there was no way it was coming out, at least not in one piece.  That peg got painted in place. 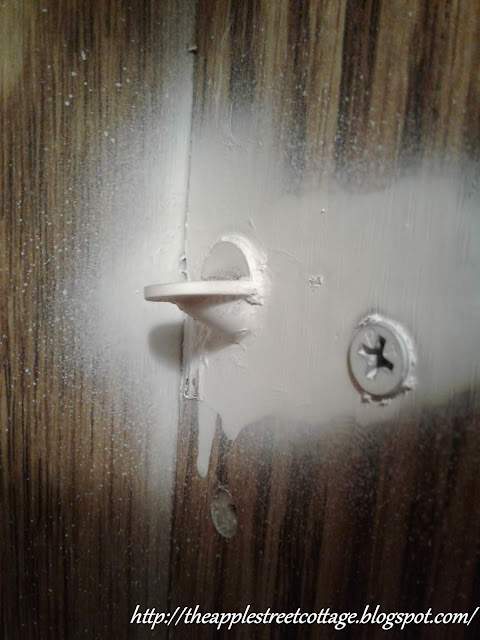 Not too pretty, but it got the job done.

You may also notice that the hinges look very clean.  Trust me when I say they didn't come off that way. 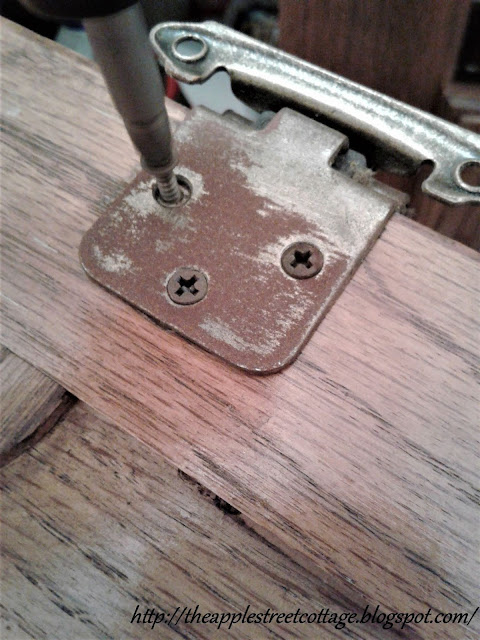 Dirty and rusty!
They were put in a can with some baking soda: 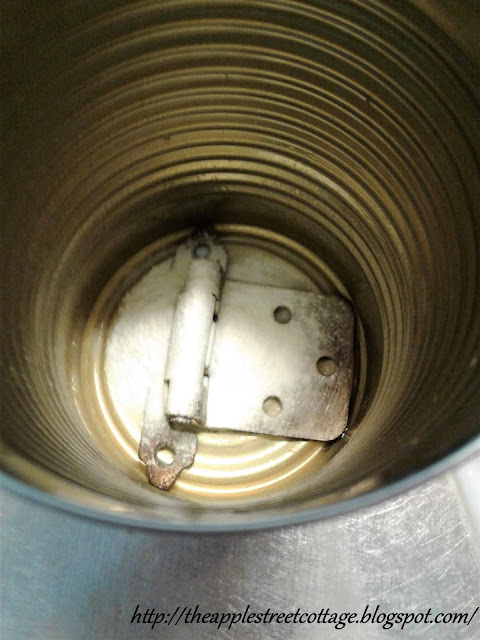 Boiling water was poured over each hinge and they were left to fizz for a few minutes. Once they were done fizzing, I dumped them out and gave them a good scrubbing with an old toothbrush. 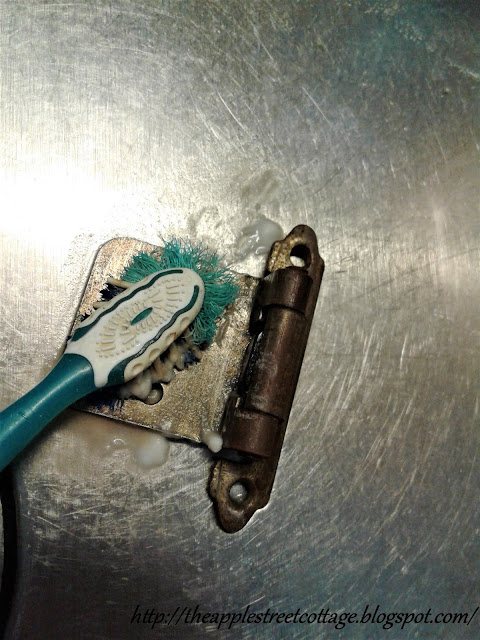 They looked much better: 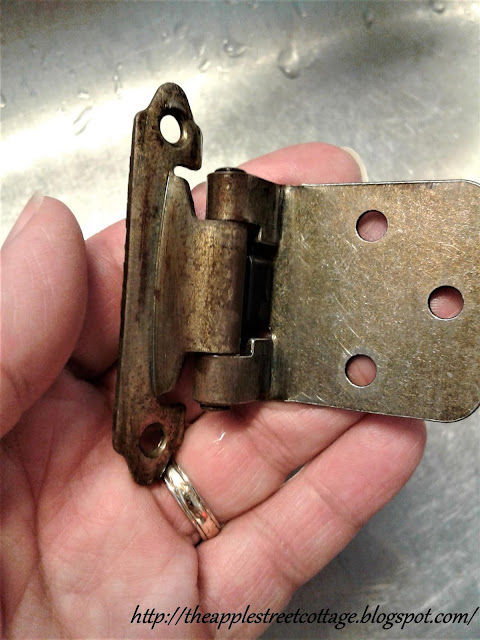 Fine sandpaper removed any leftover rust and they were ready for paint.

The interior of the medicine cabinet was lined using contact paper.  I have a complete tutorial on how to do this.  You can read it HERE. The abridged version is measuring the space, cutting the contact paper and rolling off the backing while you smooth it down with your hand. 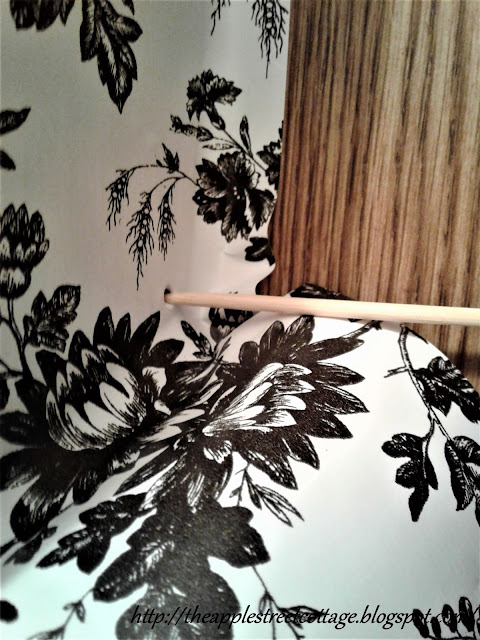 The sides were done first and the holes for the shelf pegs were poked through with a wooden skewer.  A little extra contact paper covered the back of the cabinet in case I didn't get the paper as even as I'd like. 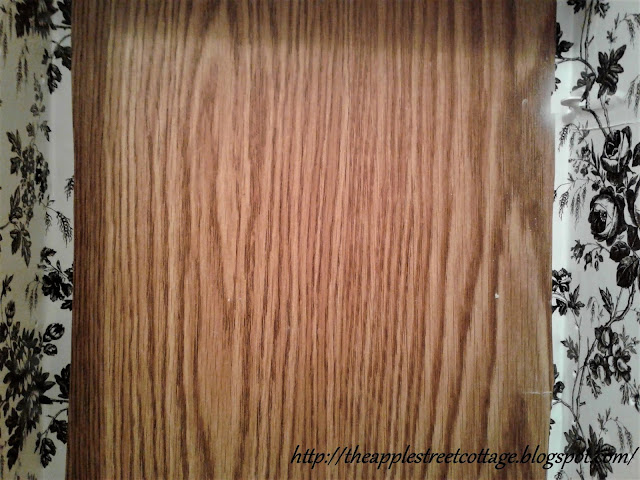 Then the back piece was added...I DID get it even! 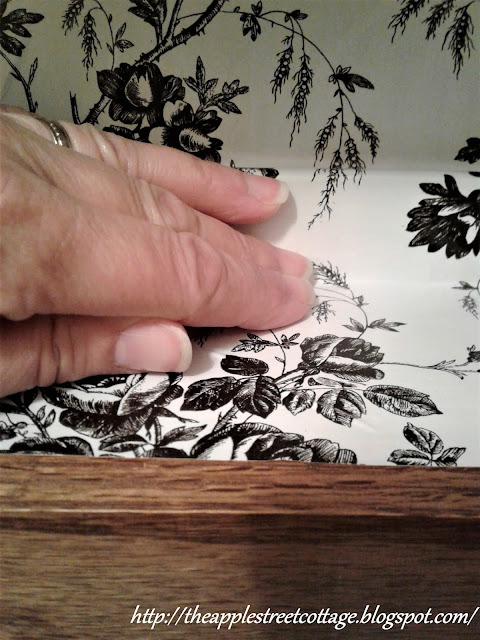 With that done, it was time to clean, sand, prime, and paint.  Everything was washed with Murphy's Oil Soap and all the surfaces were given a 'scuff' with 220 grit sandpaper: 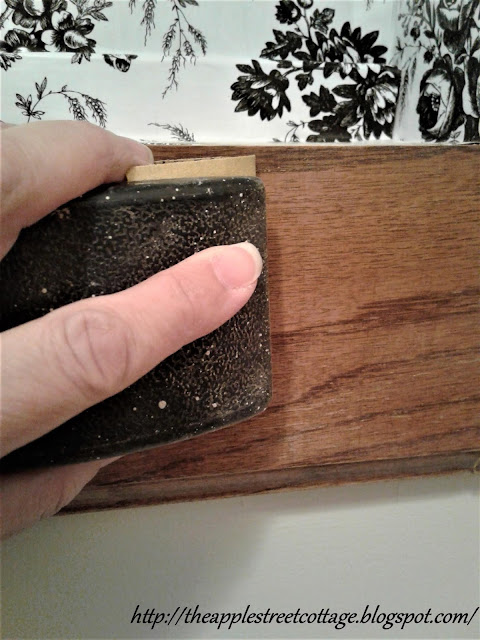 ...wiped again, and then they were ready for primer.....all except one cabinet door.  It had a little damage: 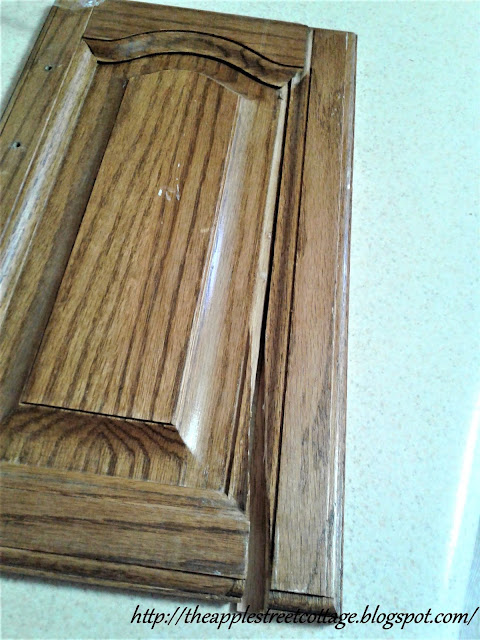 Some wood glue, a clamp, and some really big rubber bands took care of that problem: 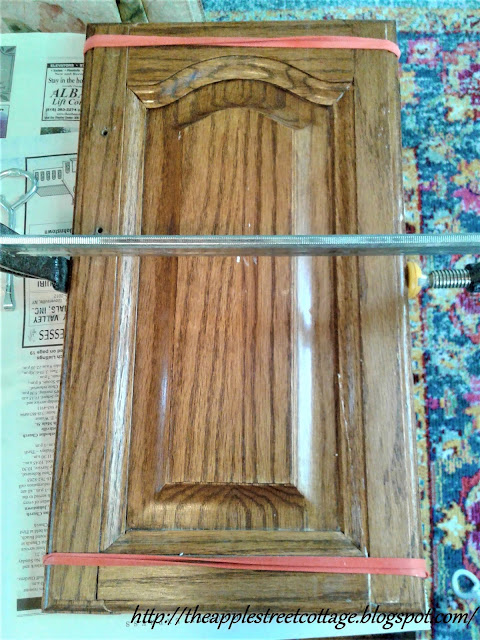 Some wood dough was used to completely fill-in the crack and to cover the second hole from the pulls.  Remember, the pulls are being replace with knobs.
Next there was primer.  I used two coats since the wood was so dark. 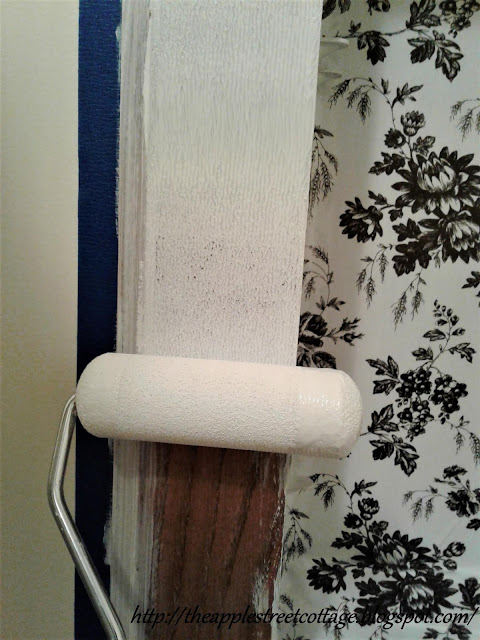 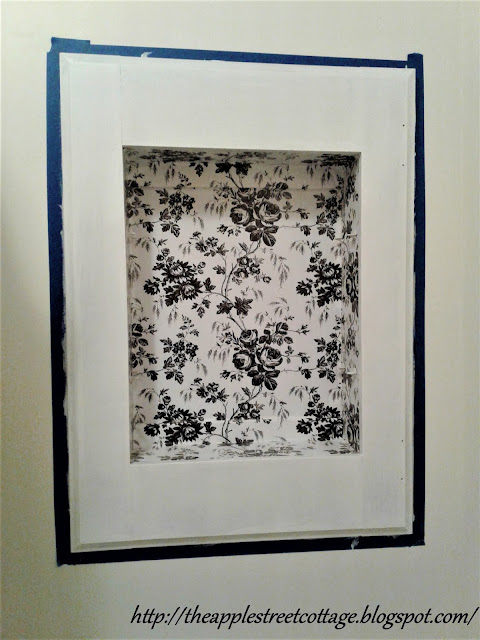 I'm not going to show each piece because, really, how many pictures of primer do you really need??  lol
Finally it was time for color!  My inspiration was a set of hand towels in a pretty shade of green.  I took them to the paint counter and they matched the color for me.  I didn't choose the first color recommended, but another in the same family.  It's called Spring Stream.
Everything got two coats of paint. 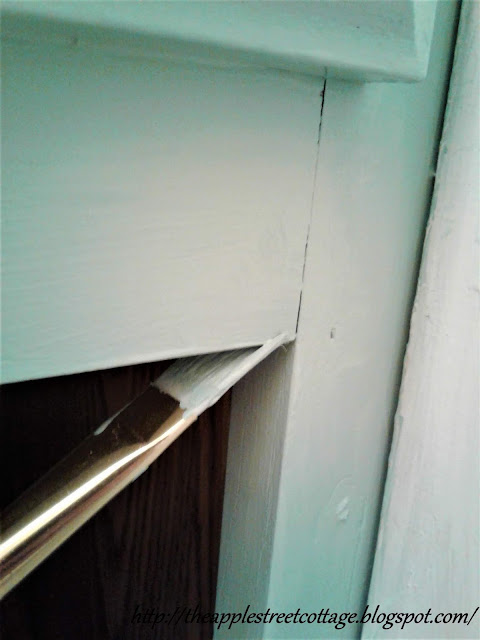 The next thing to consider was the backsplash.  I didn't want to get involved in tiling, so I considered peel and stick tiles.  I took a look at them in the store and really liked them........until I  saw the price.  $10 for a 10" x 10" square and the price went up from there.  I was going to need 6 or more and that was too rich for my blood so I considered paint.
I decided to step away from the 'tile look' and found this pretty vine to cut on my Cricut.  I cut a few of them out of cardstock and got to work. 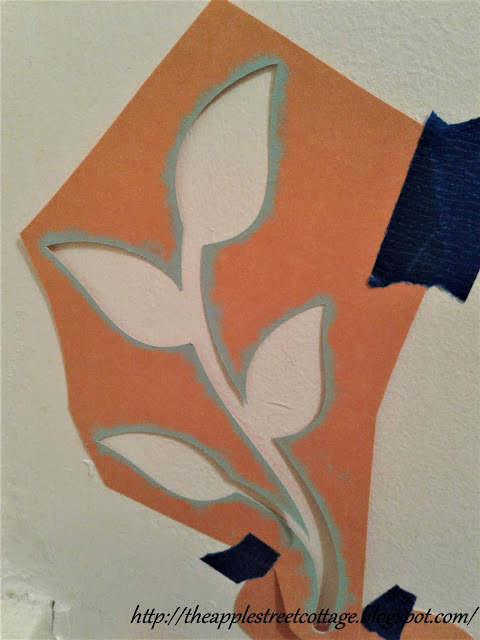 Using a stencil brush, the design was filled-in. 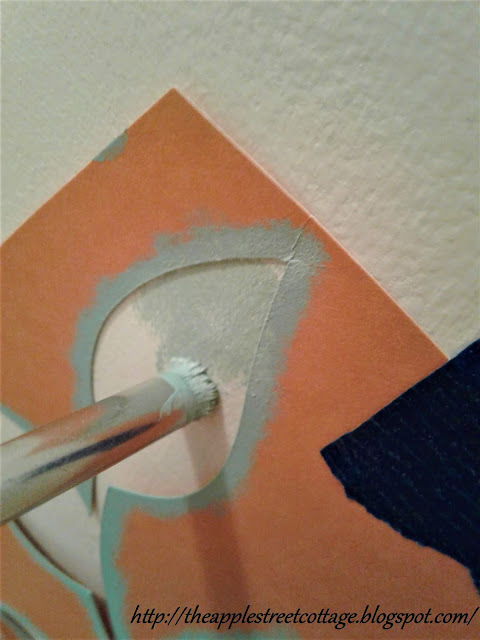 I went back over it with a small brush so the color was even. 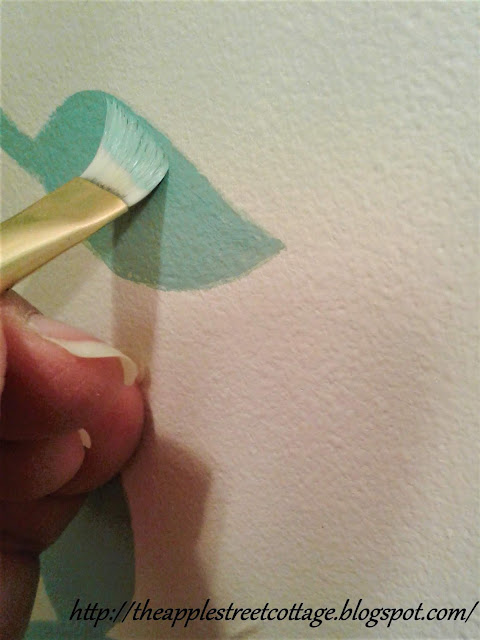 The last thing was a new soap dispenser. I found this one for $4.99: 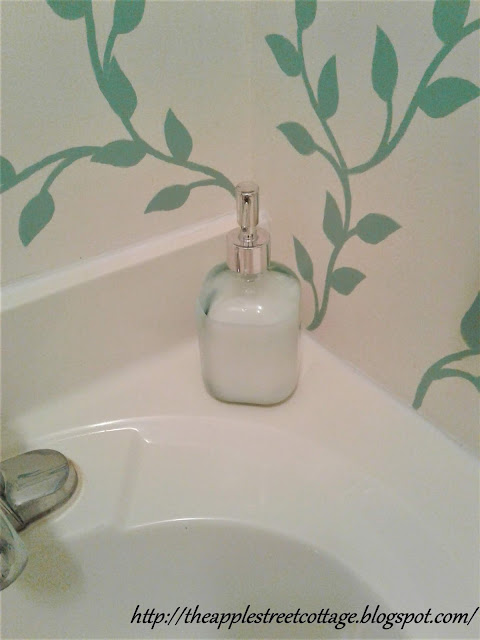 The project was done.  Here's a breakdown of the materials:
What I already had:
sandpaper
baking soda
Murphy's Oil Soap
spray paint

I'm so pleased I was able to transform this tiny room on a budget and I still have plenty of paint leftover for future projects! 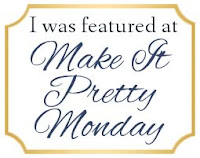 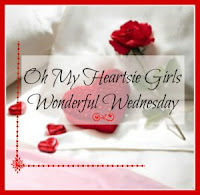