- August 28, 2021
Everyone is transitioning into Fall.  I don't know about you, but, in my world, Fall doesn't arrive until the day after Labor Day.  My birthday is the end of this month and believe me, I always remember the 'Dog Days of Summer' during my birthday parties as a child.  My mother wouldn't even bake a cake because it was so hot!  Don't worry, she'd run out and buy something.....
The bottom line?  August is just too early for pumpkins in my world.
But enough about that.  The lanterns I'm about to share can be used all Summer and into Fall so let's get started!
This is a 'first' for me.  Last summer I decided to try growing birdhouse gourds.  The vines grew great, but the flowers weren't being pollinated.  The problem?  The flowers bloomed in the early evening and all the bees were already tucked in their beds!  I decided to take action and started hand-pollinating with a q-tip.  It worked - far be if from me to have to wake up the bees! 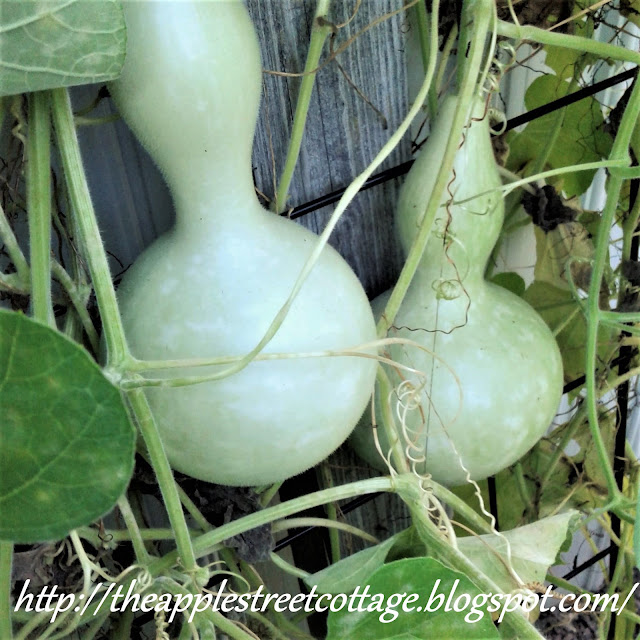 These are the two gourds that survived.  After extensive reading, I learned that when the stem starts to turn brown you can cut them from the vine.  The two above were cut when that happened.  I also read that the gourds could stay on the vine - some people said they even left them there all winter.  So I tried it. The first frost came and that was the end of them.....I think someone lied!
In the Spring, I washed them with a bleach solution because they were covered in mold (yes, I wore a mask).  One had a couple of soft spots, but I decided to take my chances.  After they dried, I smoothed them with fine sandpaper and decided where to cut the hole - yes, I chose the soft spot on the one.  At first, I thought I'd drill a few holes close together to get started, but then realized it was easier to use a utility knife. 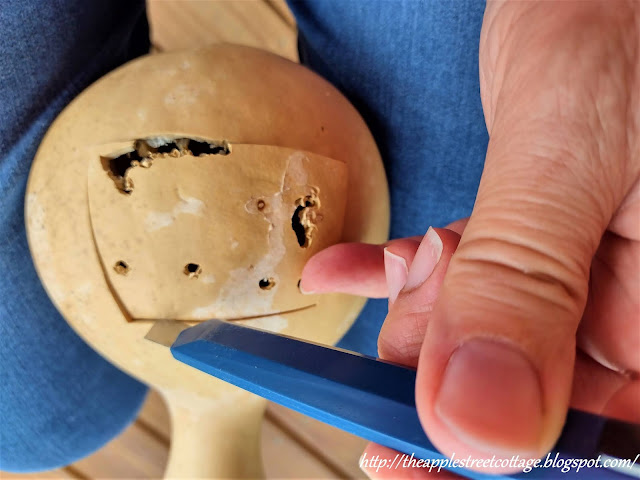 This is what I found inside: 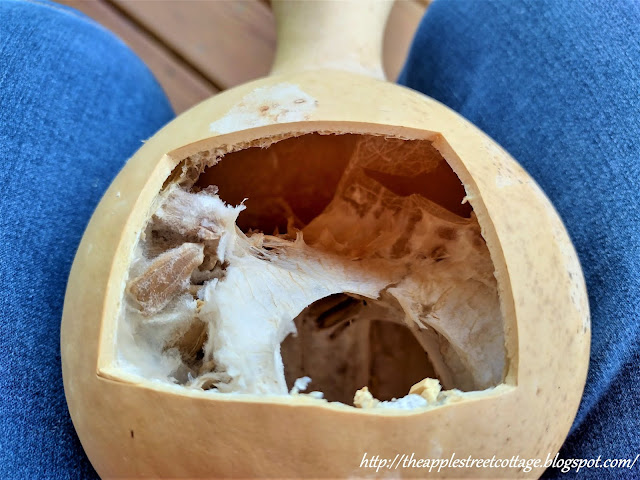 The dried pulp and seeds removed: 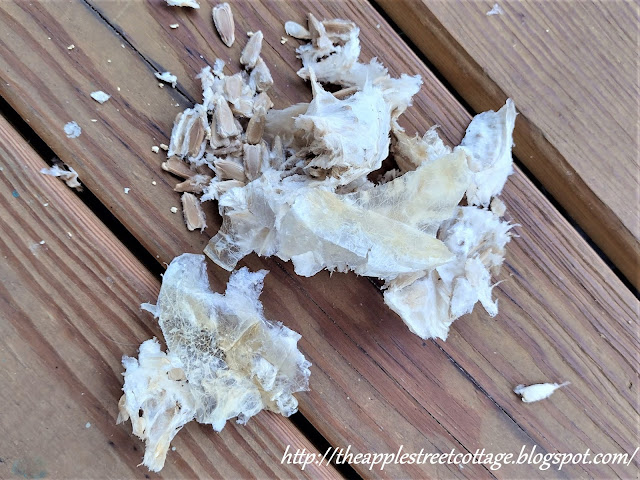 Here's a peek at the inside: 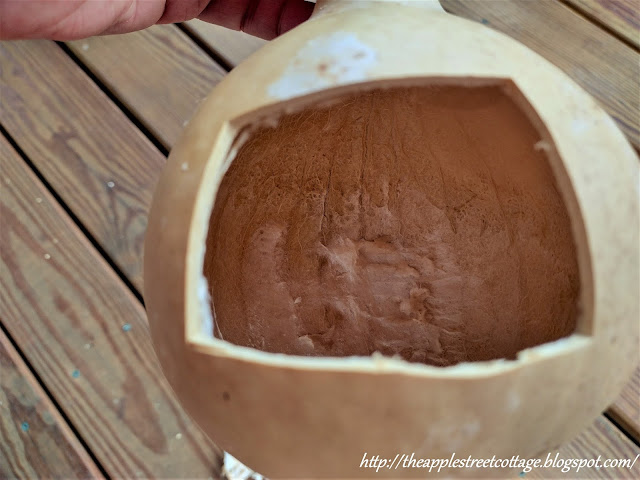 I grabbed my trusty drill and started drilling some holes with different sized bits. 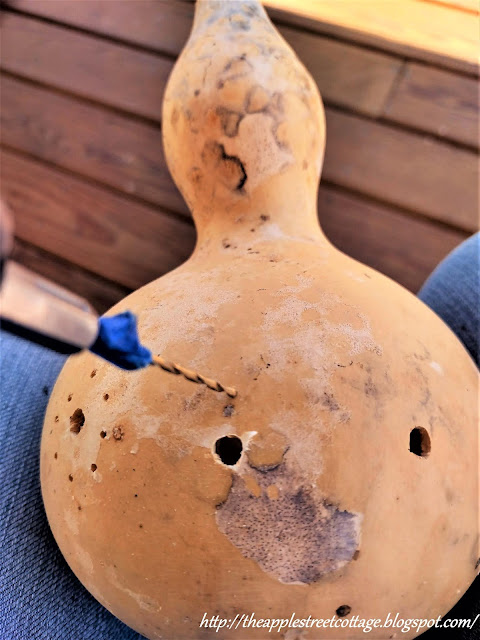 Notice the pattern on the gourd - that's from the drying process and the mold.
More holes drilled and it looked like this: 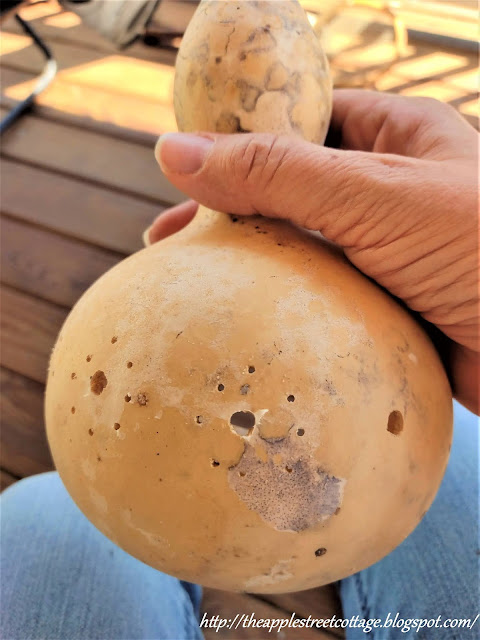 When I felt I'd done enough drilling, I decided to give it a coat of light stain.  I chose pecan. 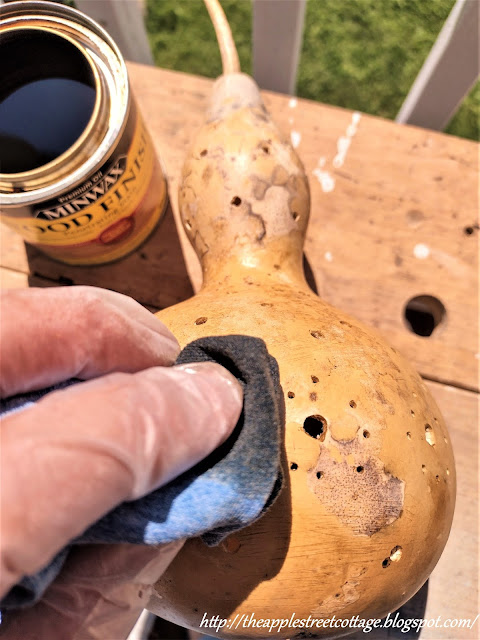 It wasn't a dramatic difference, but I guess you could say it 'enhanced'  the color.  If you look carefully at the picture, you can see the difference in the top part that hasn't been stained yet.
I sprayed it with clear sealer - inside and out, added a battery-operated tealight and waited.  When it was finally dark enough, I had this: 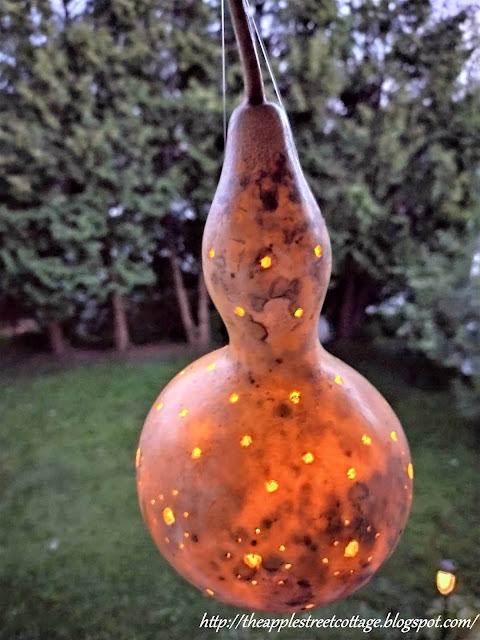 Doesn't it look like it's glowing?
The other gourd got the same treatment, but I used a darker stain - Red Mahogany. I tested it on the piece cut from the back: 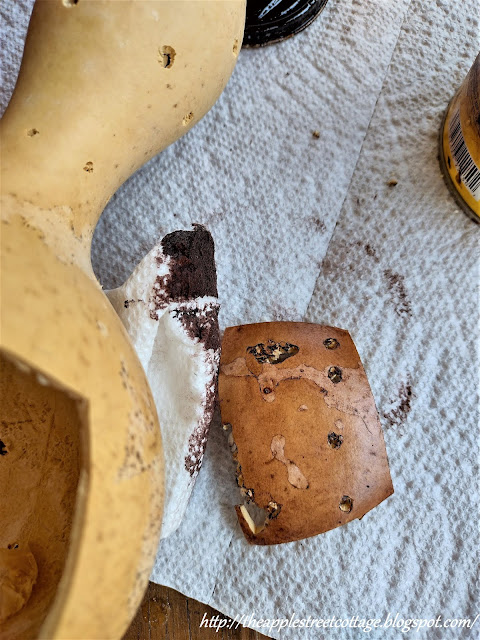 I liked it so the whole gourd was stained (after drilling the holes). 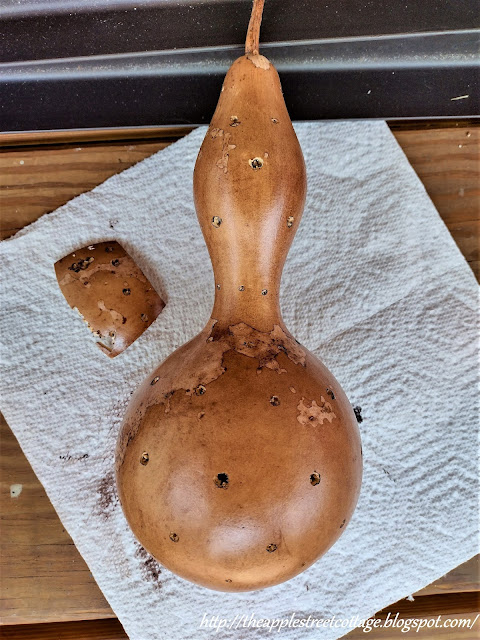 Again, I love the pattern from the drying process!
Here it is lit: 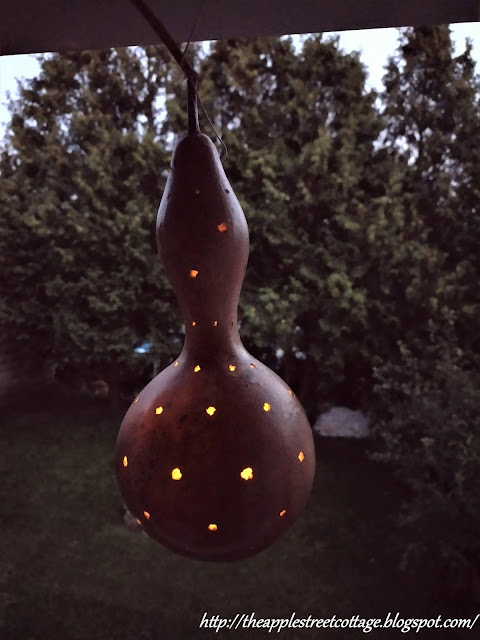 This one doesn't seem to 'glow'.  I'm wondering if it's because of the darker stain? Or, maybe it's because it's darker.
I didn't grow any gourds this summer and since it's been such a strange, wet summer, it probably was a good decision.  Maybe another year.
For now I'm pleased with my experiment and I hope my lanterns will last a long time.
How about you?
When does Fall start in your world?
Have you ever grown birdhouse gourds?
Have you had success?
Let me know - I'd love some tips!
I hope you'll pin, share, comment, and follow.  If you click on those 3 little lines at the top left of the blog (on the Home page), you'll see where to find me...or click on the icon below to share.
Featured at:
Happiness is Homemade 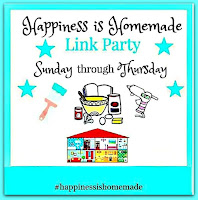 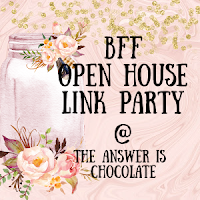 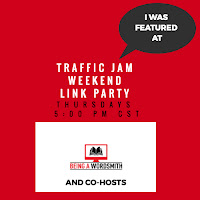 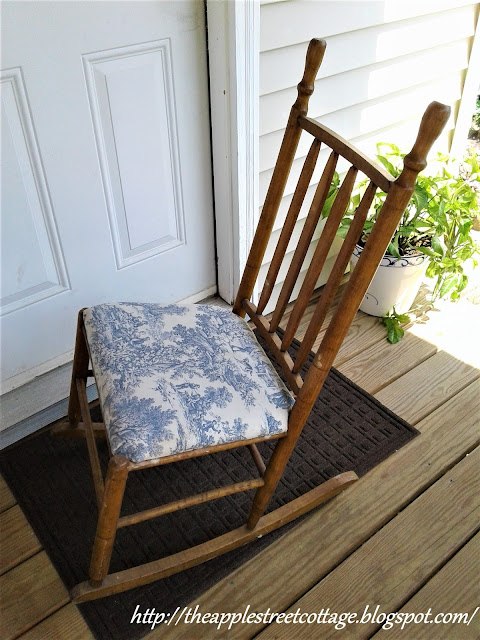 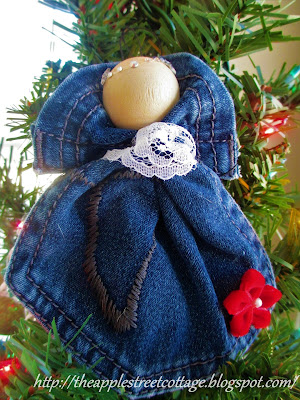