- January 13, 2018
How's your week been?  It's been pretty cold here and we've had some snow - a bit of an adjustment after spending 6 weeks in the desert!   In addition to getting home and back into a routine, my brand-new laptop needed some attention. It's been randomly shutting itself off and generally being a nuisance.  So, I contacted the support line and after 2 hours, it was supposed to be fixed...until the next day when it shut itself off again!  Back to tech support for another hour and then the decision to re-image the computer and bring it back to 'factory'.  Did I mention it's a brand-new laptop???  Three hours later, it was done and then I had to spend time putting it back the way I needed it.  There's still more to do, but, I had enough to get this post written - fingers crossed that this is the end of my technology troubles!!

So I guess I'll be like a mermaid and 'roll with the tide', since there isn't much else I can do! 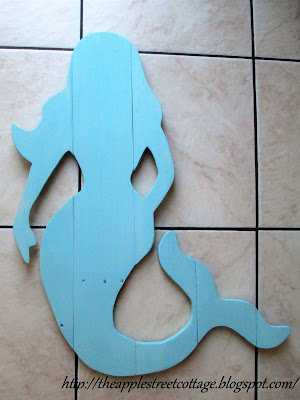 This mermaid was my daughter's Christmas present.  She's loved mermaids since she was a little girl (remember Ariel?) and even has a Pinterest board dedicated to them.

I started by looking at LOTS of images on the internet.  I had an idea of what I was looking for and started drawing the different elements like the hair and tail.  When I was done, she was about 3 feet tall.  I got out pallet wood and started 'fitting' her on the wood. 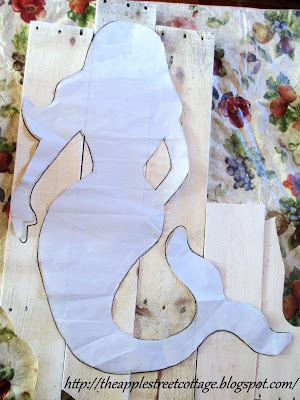 The goal was getting her to fit on as few pieces of wood as possible.  Once I was happy with the layout, I traced the pattern with a marker. 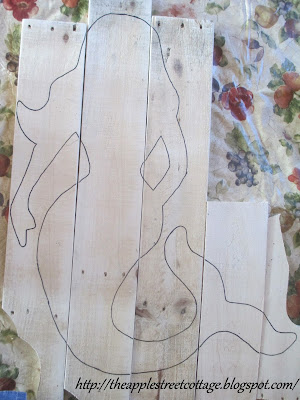 Out came the jigsaw and before you knew it, she was completely cut out. 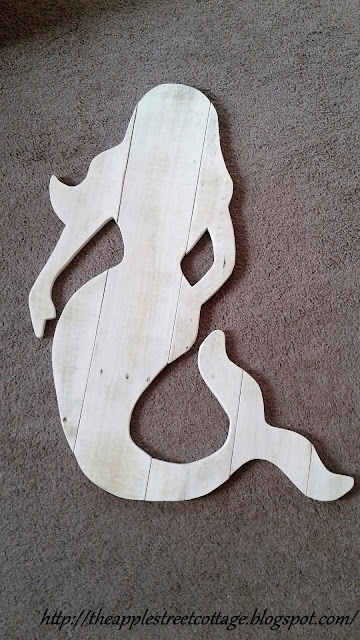 The wood from this pallet was very light, almost white and I thought about just putting a light stain on her; but, since blue was a color in my daughter's house, I went with that.  I used chalk paint, some light distressing and clear wax.

In case you're wondering how I held her together, I used paint stirrers to strap the pieces and screwed them into the wood - just like I did with the Pallet Pumpkins.  You can take a look HERE.

My efforts were a success.  The mermaid is now hanging in her home.  I suggested putting a starfish in her hand and the only reason I didn't do it was the fear of it breaking in transit; although, gluing the starfish to a thumbtack and using the thumbtack to mount it is always a good option.

My daughter just sent me a picture of a pineapple, so I guess that will be my next design.  It's nice to have something to work on while it's snowing outside!  Silly me, I thought it would be a seahorse! 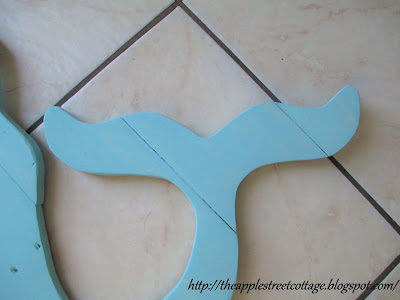 Well, I've come to the end of this mermaid's 'tail'.  I hope you're having a great week and keeping warm!