- February 23, 2019
I don't know about you, but, once in a while I see a wine bottle that has potential.  Sometimes it's the shape, sometimes it's the color.  With this one, it was the finish.  It had a nice 'brushed' finish and I immediately knew what I wanted to do with it. 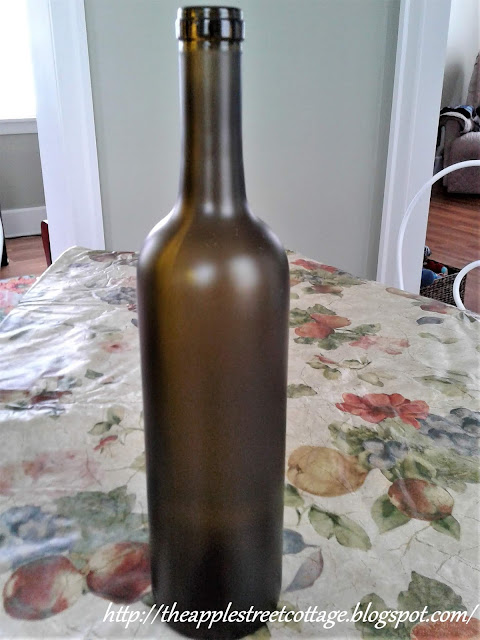 The great thing about this one was the label.  It completely came off after soaking for a few minutes in hot water.  There was no need for the peanut butter trick!
Once the label was off, I grabbed the jute twine and some E6000.  The neck of the bottle was given a thin coat of glue and the twine was wrapped around it. 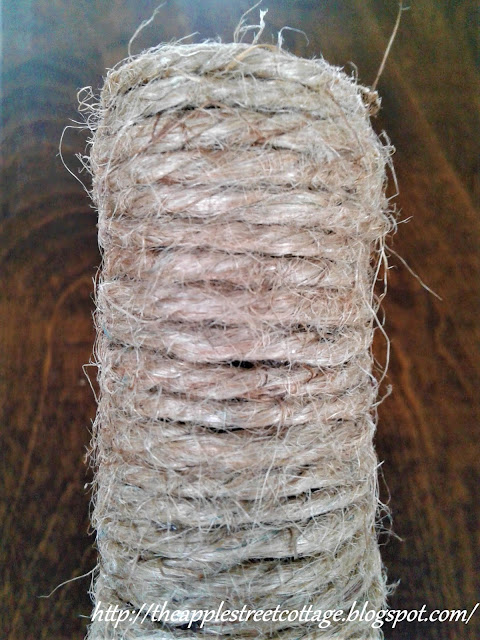 I bought some burlap ribbon from the dollar store a while ago, had no idea what to do with it, but knew it would be used at some point in time.  Since I only needed a small piece for this project, I've got lots left for something else......Winning! 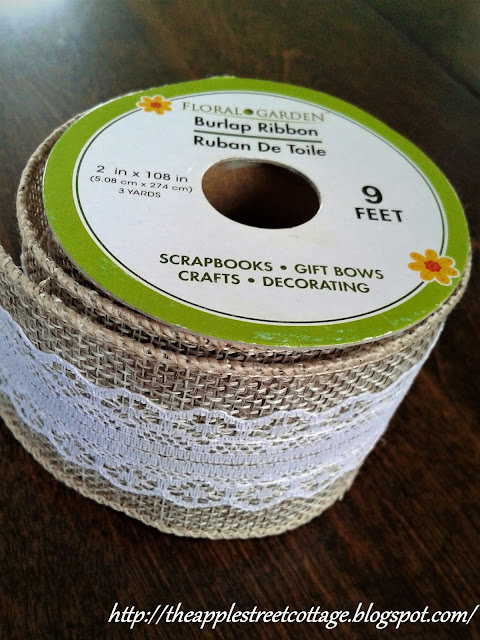 That's right, 9 feet for a dollar. How's that for a bargain?
A dot of glue was added to the center of the bottle and the ribbon was set in place.  When it was dry, the two ends were glued in the back.  I grabbed a button and a metal thingamobobbie....yes, that's a technical term for all the crap, I mean, treasures we keep hidden away in boxes....and glued it on the front. 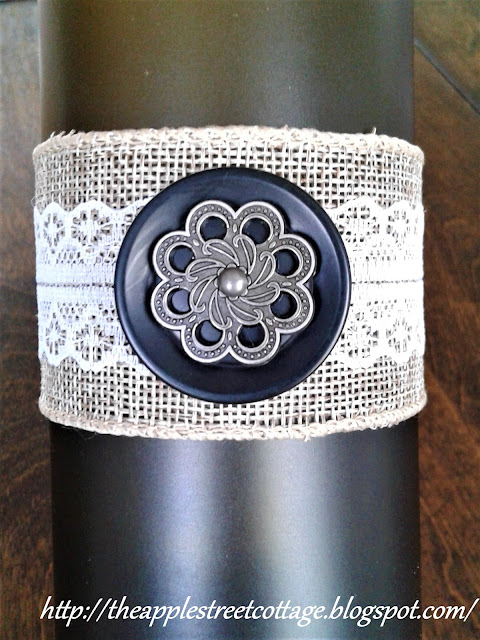 And my project was done! 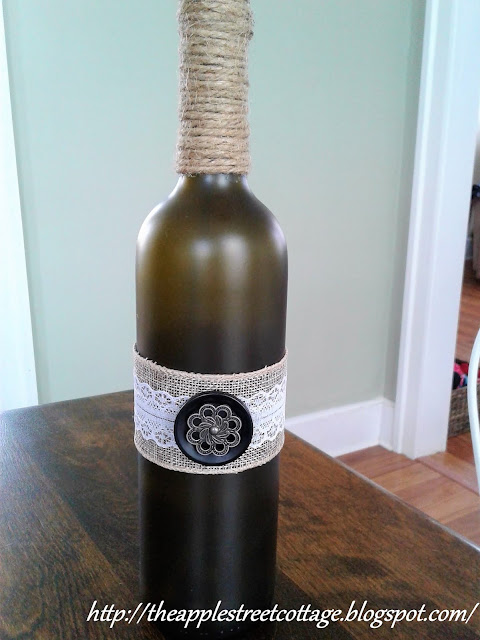 I grabbed a silk rose from the closet to make it pretty. 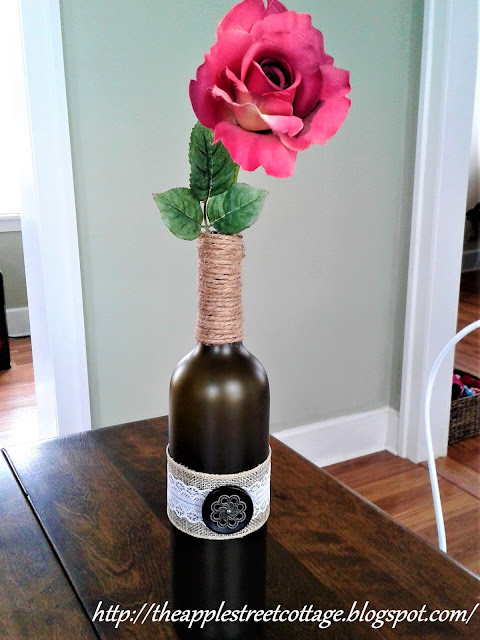 It's all I had and I wasn't running to the store for something else because it's still cold and icy out there!  Just keepin' it real... 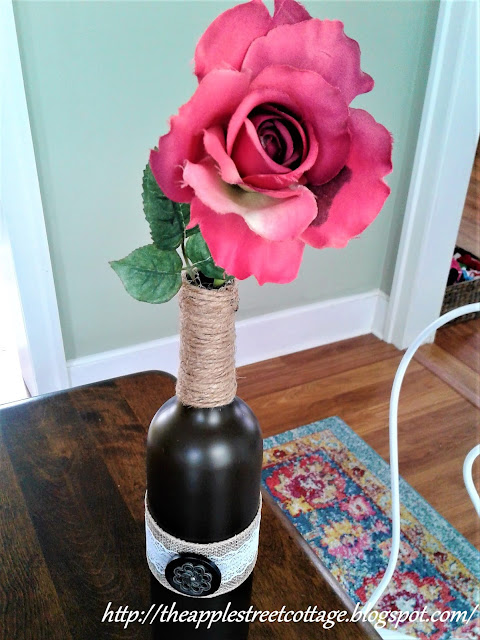 And, naturally, as soon as I wanted to take pictures the sun went behind the clouds.
Such is the life of a blogger!

I received a bottle cutter as a gift for Christmas and haven't used it yet.  I think it's time, so be prepared for some new projects that involve cut bottles, and if you have any ideas for me, I'd be happy to hear them!
Thanks for stopping by.......

It's a Halloween Pumpkin! 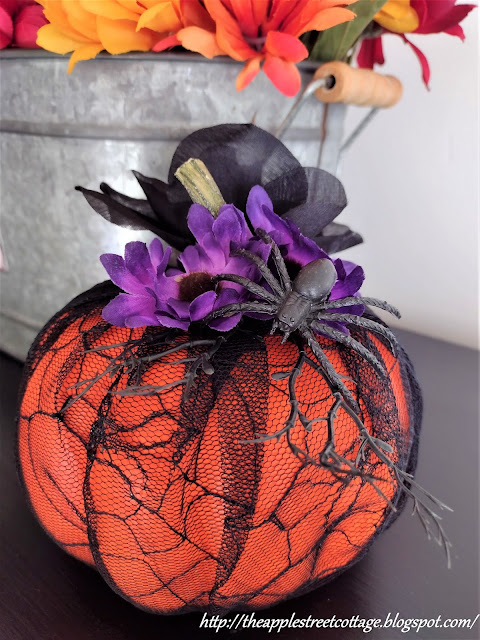 It's October and before you know it, Halloween will be here.  Today I have an easy way to take a dollar store pumpkin and turn it into something fabulous for Halloween, and the best part?  There's no painting involved!  What do you think? Here's what you need: Styrofoam pumpkin from the dollar store Black rose & spider pick Purple flower pick Old pumpkin stems - yes I save them! Spider fabric First, remove the green styrofoam stem from your pumpkin and make the center hole a little larger.  I used a pair of scissors. Next, cut a piece of spider fabric large enough to go around the pumpkin and 'tuck in' at the top. Begin wrapping and tucking your fabric around the pumpkin. Keep going... ....until the entire pumpkin is wrapped. Then, choose a stem to hot glue to the top.  I also added one of the spiders from the black rose pick. Add two purple flowers for some color and black twigs from the black rose pick. Finally, add a black rose because it's Halloween! A
Read more 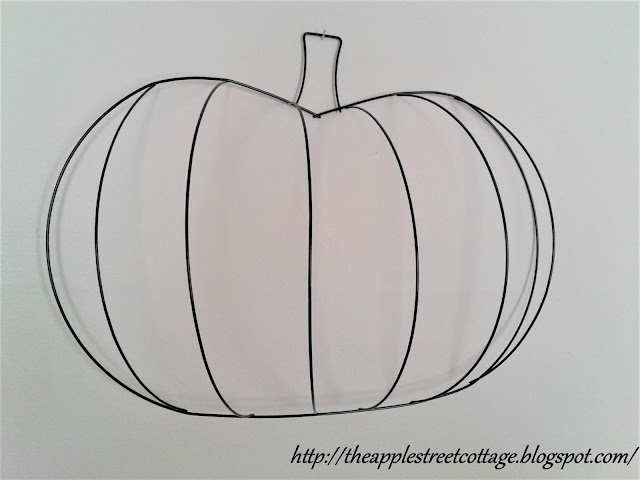 UPDATE:  This project has been featured on HomeBNC.  See it HERE . The Dollar Tree has really stepped it up lately when it comes to crafting and today I want to show you one way to use those wire pumpkin wreaths. I was in the dollar store and spied this wire pumpkin.  I didn't know what I was going to do with it, but I knew I'd think of something.   It all came together for me when I was looking through the sale bin at Joann's and saw this spider lace fabric for about $2 a yard.  I grabbed a yard and a half. I cut the fabric into four pieces and placed the wire frame over one of them.  I sat there for awhile and pondered how to attach the fabric to the wire frame.  My first thought was hot glue, but thought it would look sloppy, so, out came the needle and thread.  I started across the top by 'sewing' the thread through the fabric and around the wire.   Then I grabbed the two ends of the thread and tied them in a knot. I repeated this multiple ti
Read more