- June 26, 2017
Every once in a while, you have an experience that absolutely astounds you and restores your faith in humanity.  On Saturday, my husband and I had one of those experiences.
It was the perfect summer day, sunny, temperatures in the 70's, and low humidity.  There was a garage sale I was interested in and we didn't manage to get there until after 2:00 in the afternoon.  The man who owned the house was very friendly and we struck up a conversation.  I commented on the beautiful view of the lake and he invited us to go around to his deck and enjoy it.  We said we didn't want to impose, but he insisted and the next thing we knew we were sitting on the deck chatting like we'd known each other for years. 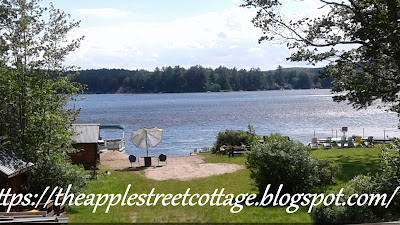 We introduced ourselves - his name is Gene and he told us that his house once belonged to his mother and was very tiny. Over the years, he added on to it using wood and rock from the property until it became what it is today - a 5 bedroom, 2 bath house with a huge deck.  The picture above was taken from that deck.  The inside was finished with wide pine boards and some of the walls were finished with stone.  It was amazing!
Yes, he invited us inside to see it.  At one point, someone came to the door and asked about something he was selling.  Gene went out to deal with that and told us to stay put.  We were astounded - we had just met him and we were invited into his home like we were old friends!
When he returned, he told us we had to see the beach, so, off we went.

His two dogs were the sweetest, but Sophie was the lovebug of the two. 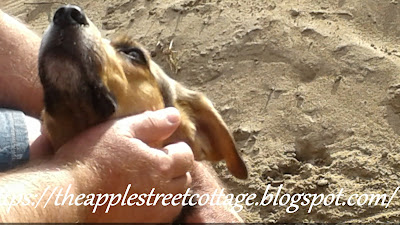 Gene went on to tell us that he was battling cancer but this place was his dream and his 'healing'. He's not able to do what he used to, but he takes time every day to sit on the deck and walk down to the beach and enjoy the lake.  There is a boat that he still takes out and a fire pit for the evenings.  I can tell you that it was so peaceful and I was content to sit in an Adirondack chair and listen to the lake water lapping at the shore.

I don't know about you, but it isn't often we are invited into a strangers home to spend the afternoon.  It wasn't just 'an afternoon', It was a truly remarkable day and we came away with a new friend, whom I'm sure we'll visit again soon!

One last note. Gene sent me home with a cutting that had been rooting from one of his plants.  The original plant (that was sitting in the window) belonged to is aunt and was from the 1920's.  He called it "Moses in the Bullrush".  There is a story behind it, but I'll let you Google that one! 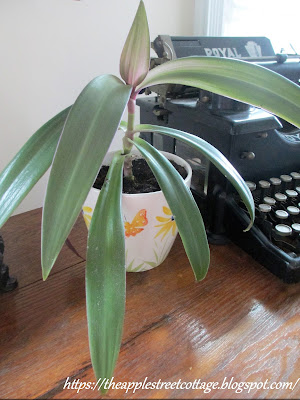 I hope this little story restored your faith in humanity as much as it did mine - have a wonderful week!
Featured at:
Friday at the Fire Station